Getu He, rock climbing in China

Getu He, rock climbing in China

This fall, we took the plane to China, in order to reach Getu He valley. Some people had already done rock climbing there before but Petzl team bolted many new routes for its climbing event in 2011, Petzl Rock Trip. Since there, we thought it could be interesting to go there for a climbing trip. On top af that, it would be for sure a very exotic destination for us, lost in China and very far from France!

And as soon as we arrived in Guiyang airport (Guiyang airport: 贵阳), which is the closer to Getu He, we just were on another planet. Everything here is so different. You can see people dancing in the street at any hour. Others are playing diabolo and you can see funny means of transport like this special bike used to carry vegetables. There’s also an incredible difference between very fashionable shops and traditionnal ones. 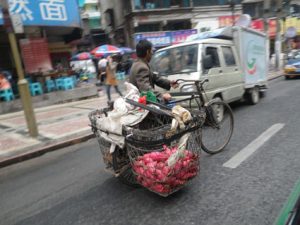 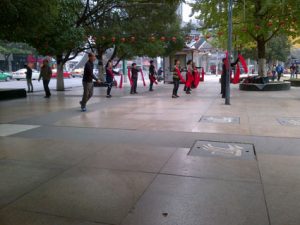 Something important you have to know arriving here is that almost nobody can speak english. This means that you need a good preparation in order to arrive where you want. It s impossible for us to read chinese indications and renting a car is a very bad idea. That’s why it’s very important to print on papers the names in chinese of the places you want to go to. Taxi drivers are very busy people and you’ll have to show them very quickly the adress of the hotel if you have to spend a night in Guiyang, which is almost inevitable as you have to give your arriving adress in China to have your visa!

Most of the taxi drivers don’t like to get out of Guiyang city, so the easier to reach Getu He is to go to Jinyang bus station (金阳客运站). From there you’ll take a comfortable bus to Ziyun ( 紫云). It’s about 2 hours. It seems there are only two bus each day and the last one left Jinyang at 13h00 during our trip.

From Ziyun, a small bus takes you to Getu in 45 minutes. Last bus from Zinyun to Getu He ( 格凸河) at 17h30 during our trip. 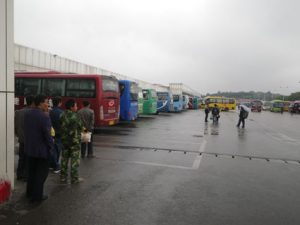 Gigantic Jinyang bus station where the game consists in geting inside the good bus!

On the road to Getu, The landscape becomes very different from Guiyang’s one, with small villages lost in the fields and these very special green chinese mountains. 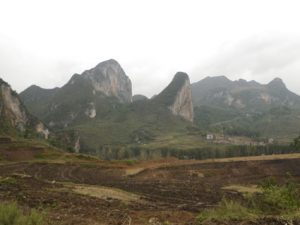 The entrance of Getu valley, china 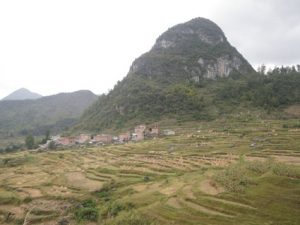 A village in getu valley

We decided to stay at the guest house which is on the left at the entrance of Getu village, with many Petzl posters. There are two hotels a bit further but the guest house has the best food (to eat with chopsticks !) of the valley and it’s very cheap with a good comfort (60 yuans per person for night, dinner and noodles for breakfast). We didn’t book anything before arriving. Anyway, the very friendly family doesn’t speak english, so it would have been complicated to do it!

You can find small stores in the village where you can buy a few things but if you need coffee, fresh fruits or any other special food, you’ll have to go to Ziyun.

You needn’t any car to go climbing and the further cliff is Fish Crag that you can reach in a 45 minutes walk. There’s a lot of choice in grade 6 or 7. Strong climbers doing grade 8 would have quite few routes to do though these are very nice. There are also less routes in grade 5. The weather is rather wet but many cliffs are protected from the rain. Just take some dry clothes to change once you will be under a cave! It’s a bit more complicated to find grade 5 routes for the rainy days…

At the entrance of the valley, you can find very nice routes in grade 6 or 7. Fish Crag offers steep technical walls while Oliver’s Crag, Rastaman and Wawan’s Crag are quite overhanging. 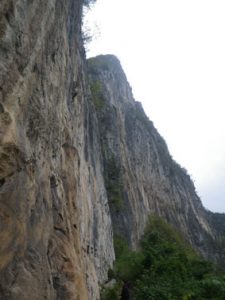 Fish crag and its beatifull wall. 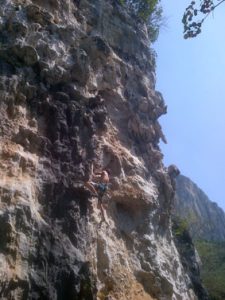 The nice 5c+ of Rastaman crag 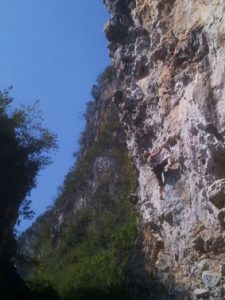 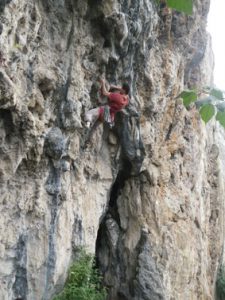 Roman, climbing the amazing 7a+ of Wawan’s cave.

In the same area, you can find easier routes in White Crag, Left of Red and CMDI wall, which one is also a very good cliff for multipich routes. You can also find a long route in Pussa Yan with a complicated descent and some easy routes at the bottom.

A bit closer to the village, you can go to Banyang’s Cave which is probably the best sector for hard routes at that time. You’ll have long routes in 7c on tufa climbing on the left side and nice stamina routes in 8a/8b on the right wall. 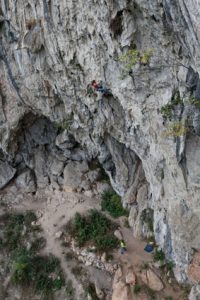 Flo climbs the long routes with tufa on the left of Banyang cave. (Photo: Roman Bayon) 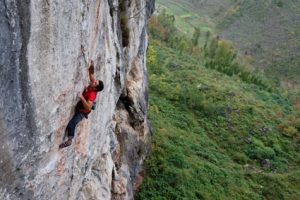 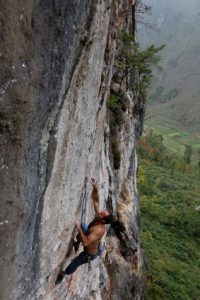 In front of the guest house, the Lazy Dragon sector has some nice routes. You have to cross the river that goes inside the cave to reach the routes on right side which are rather dirty for the moment as few people climbed there.

On the paths to go to the cliffs, you’ll see many fields and the inhabitants spend most of their time working outside to produce vegetables and rice, sometimes with incredibly old techniques! It’s just like travelling throughout the ages. It’s also a big surprise to see some of them get the last generation of smartphone out of their pocket to phone a friend while working!

Although they are very poor, people are very friendly and many invited us to eat something while we were walking in the country. Tourism is rather new here and people are curious about europeans. Pyrotechnics and firecrackers are very popular and you sometimes will have the impression of beeing in the middle of the war. 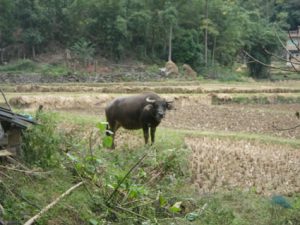 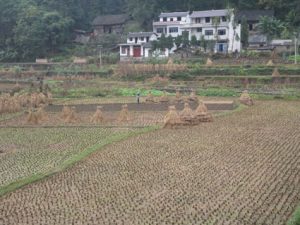 If you go in the opposite direction, you ‘ll find the two great arches that made all the fame of climbing in Getu. This is a national parc and you’ll have to pay either for a six days pass or for a one day ticket. We were very impatient to see these gigantic caves! 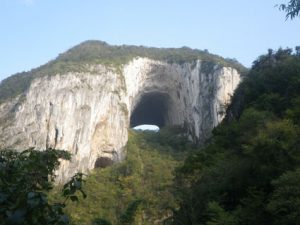 We didn’t climbed on the lower arch where there are only multipitch routes with the famous « Voie du milieu » in 8b+, to hard for us!

To reach Chuanshang Cave, the main sector, you’ll have to take a ferry boat. Take care that the ferry service is no longer available after 18h00! 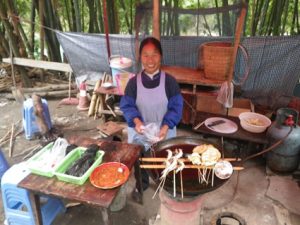 Food on getu river side, china

While waiting the boat, you can try local food with fried potatoes, fishes or meat! 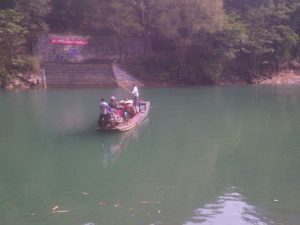 The ferry to go to the main arch of Getu

You’ll have to climb the 1500 stairs before climbing in Chuanshang Cave. Perfect for warming up! 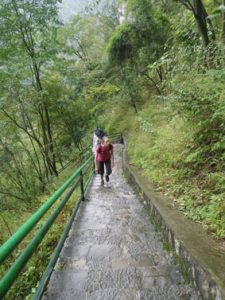 The steps to reach Chuanshang Cave 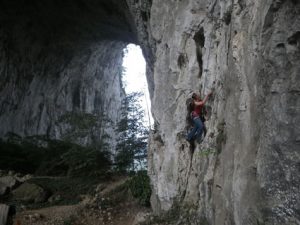 You ll find very original routes with strange pockets in this arch. Most of the holds are undercling in these routes and this makes the climbing very technical and physical in the same time. As it’s white rock (as often on shadow cliffs) and rather new, the friction isn’t very good. All the routes are protected from rain and you’ll find grades from 6a to 9a. 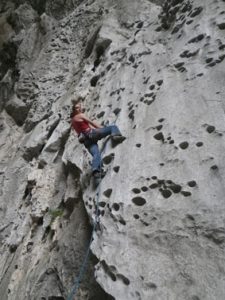 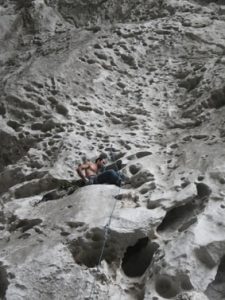 Having a good rest before the hard section of Autochtono, 7c+

When we were in Getu, chinese had started big works in the arch. As a consequence, it was very noisy and it was impossible to climb some of the routes because of the installations on the ground…

On the path to the great arch, you can go on the left to reach Flag Cliff’s routes, very nice but almost never climbed or Buddha Cave with amazing hard routes in grade 7 or 8. 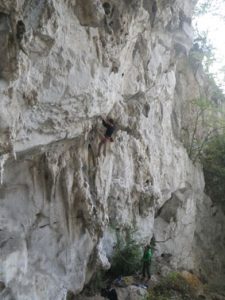 Roman is having fun in the amazing routes of Buddha cave.

After climbing in the Great Arch, although the routes on pockets are very beautifull, we had clearly the impression that doing the incredible multipitch routes  in this big roof was the best climbing here. There are many 200 m routes here, from 6c+ to 8c+ for the incredible « Corazon de Ensueno » de Dani Andrada.

That’s why I came back a few days later with my friend Guillaume to climb « Lost in Translation ». This route has a bright itinerary and was equiped by Stephanie Bodet and Arnaud Petit. It’s absolutely incredible and we were really happy to have big fights in such a big roof! 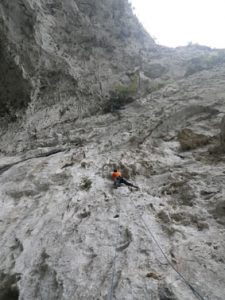 The first pitch of Lost in Translation. There’s still a lot to do! 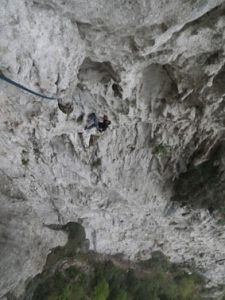 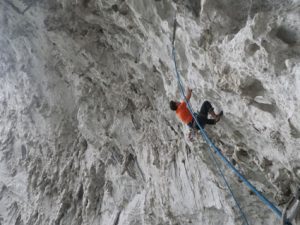 Guillaume in the crux of Lost in translation, the third pitch in 8a. 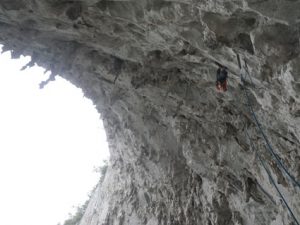 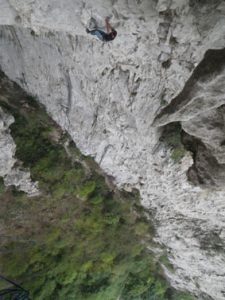 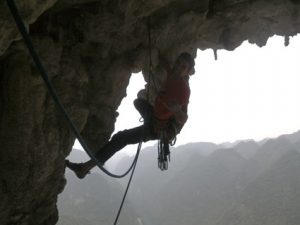 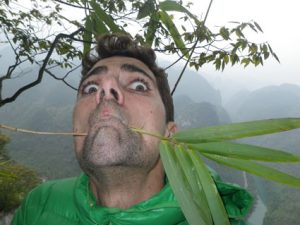 Guillaume went back in the cave two days later with Roman to do Nihao Wokepa which is also an amazing route!

Health: hepatitis A and B, dTP and typhoid. Apparently, no big problem of malaria near Getu but close regions require more precautions, especially in rainy season. Take Micropure pastilles to prepare the water which is not drinkable, a good first-aid kit for the small cuts  and other disorders. The food is quite spiced and gastric disorders are possible.

Administrative: valid passport with two consecutive free pages and compulsory visa. For the visa, it is necessary to supply a whole list of documents and to prepare everything at the latest one month in advance.

Season: we were in Getu in October-November and the climate was very pleasant.

Currency: 1 euro is approximately 8 yuans. Difficult (impossible?) to have yuans before your departure. Best is to withdraw money with your credit card arriving at the airport in China. Take care of swindles in some small exchange offices. Life in town is much  more expensive than in countryside. For information, we needed 300 euros to spend 3 weeks in China.

Plane: the plane ticket Nice-Guiyang is around 900 euros. Approximately 25 hours are needed with long enough stopovers in oder to have fewer chances to lose your luggage. If they happen to be lost, it seems better to wait for its in Guiyang than in Getu!

Mind you: it is good to have your sleeping bag with you and an additional mattress  ( beds are quite hard) for more comfort even if there are covers in the guest house. The mobile phone works well in Getu. WiFi and electricity in the guest house (plan an adapter).

Guidebook: for the moment, the most complete one is supplied by Petzl, you can find it here.

And for those who would like to go in Getu He, you will find more informations on Petzl website, or on El Potrero Chico website with this article.